According to Vincent Letang, the head of global forecasting at Magna Global, “TV global growth is diminishing. In most major developed markets, TV growth is slowing and in some cases stagnating.” From that insight people can sense that tv advertising is indeed going down.

In a forecast that was done by eMarketer, they reported that TV advertising spending will be surpassed by digital advertising. With its decreasing trend there will be no doubt about it being lesser than the digital advertising which is soaring higher each year. In the year 2014 it was reported that 39.1% of the total revenue of all media ad spending is TV advertising but when 2015 came, a decrease of 1.4%. By the end of 2016 it will go down to 36.8%. In 2020, the TV’s share of ad spending will drop below one third.

But an eMarketer senior forecasting analyst Martin Utreras expected the TV ad spending to grow in time for elections and summer Olympics. But still the TV advertising agencies will face even more challenges. After the events however, the revenue will drop by 1% in constant dollars in 2017 and it will drop by 0.8% in the year after next. 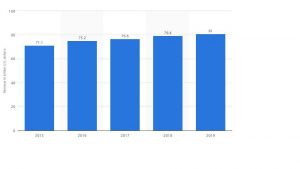 Still the fact that most traditional methods of advertising is falling behind puts on pressure to entrepreneurs to really deal on optimized digital methods. Though there are advantages in going digital but there are also disadvantages to it. If a businessman is going to choose what advertising media to use, he or she must know what his or her target market is and think very well what is the most effective out of those advertising media.